A pick stone that provides a range of hard and soft grits in a mineral matrix, which the birds enjoy eating
The Australian Pigeon Company's Mineral Block is a complete and balanced mineral supplement that can be used as a grit substitute. It has been developed under veterinary supervision specifically for pigeons. It brings natural grits, trace elements and minerals necessary for health into the loft in a hygienic, palatable form, reproducing the selection available to free-ranging birds
.
Pick stones fulfill two vital nutritional functions. They provide hard grits, which act as digestive stones, grinding down swallowed grain, releasing the contained nutrition, and also soft grits, which slowly dissolve, releasing minerals and trace elements necessary for health. Hard grits describe material that is either not or only partially digested and include small stones such as granite and quartz. Unlike other birds such as parrots, pigeons swallow their grain whole. Because of the tough nature of the fibrous coating of these seeds, a small supply of digestive stones is kept in the pigeon's stomach. As the muscular stomach wall contracts, the hard grit acts like a minigrinding mill, pulverizing the seed, making the nutrition they contain available to the bird. The Australian Pigeon Company's Mineral Block contains three different hard grits. Soft grits are also retained in the stomach but gradually dissolve, releasing the minerals and trace elements they contain. The pick stone made by the Australian Pigeon Company contains four soft grits, namely sterile egg shells, sterile sea shells, calcite and charcoal. Egg shells, sea shells and calcite are rich sources of the calcium that is so necessary during breeding to ensure good-quality crop milk, well-formed egg shells, decreased difficulty with egg laying, and strong bones in the nestlings.
One has to be careful, however, when using sea shells as a calcium source. If the shell is recently collected, the decomposing mollusc may still be inside. This small section of decomposing meat can contain bacteria that can make the bird sick. Some bacteria also produce toxins that can poison the birds. One of note here is called Clostridium, which produces a toxin that affects the nervous system, leading to a condition called botulism. Interestingly, in Victoria in 1992, we had 10 lofts all develop birds with botulism over a short period, which were all able to be traced back to a single load of contaminated grit. The sea shells and also the egg shells contained in the Australian Pigeon Company's Mineral Block have been sterilized. Shells from the sea can also contain a lot of salt, which, if the birds are deprived of water, can also cause problems. The level of salt in this block has been chemically analysed and is at the correct level for the racing pigeon. Shell sections can be too large and have sharp edges that can damage the throat, predisposing the bird to canker. The shells in the Australian Pigeon Company's block have been graded to avoid this problem.
Charcoal is a natural bowel astringent, actually absorbing many toxins from the bird's system, in the process contributing to health. The charcoal in the Australian Pigeon Company's Mineral Block has been made from non-treated timber. Many of the substances used to treat timber are poisonous and can survive the charcoal-making process. It is important that the birds are not exposed to these.
Confined birds, which include most stock birds, are totally dependent on their owners to provide everything that they need nutritionally. A nutritional deficiency in the short term will cause no problem, however, even a subtle deficiency over an extended time will compromise health. This shows as a lack of vitality, decreased reproductive performance, and a poor moult. It is well known that the nutritional demand of the pigeon cannot be met by a grain diet alone. Access to a grit or pick stone is necessary for health. We have all seen the keenness with which birds allowed outside the loft examine areas such as the garden, incinerator, and gravelled surfaces. They are looking for the substances that a balanced mineral block contains. The practice of open lofting, although giving the birds the opportunity to find these things, is not without its risks. If health problems such as worms and Coccidia are present, then the droppings around the loft will contain infective eggs, which serve to reinfect the birds following effective treatments. The birds are also exposed to harmful fungi and bacteria. Many of the insects, such as slaters, around the loft can carry tapeworms. The Australian Pigeon Company's Mineral Block brings the minerals and trace elements that birds try and obtain from the loft environment into the loft in an hygienic form. The Mineral Block is palatable to the birds, which means that it is not only something that is good for them but something that they enjoy eating.
In summary, the block contains four soft grits - calcite, charcoal (from non-treated timber), sterile egg shells and sterile sea shells - together with three hard grits in two pure clays. To this have been added specific trace elements, in particular iron, sulphur and iodine, to create a balanced mineral supplement. The block's contents have been chemically analysed and adjusted to ensure that the minerals and trace elements it contains are at the correct levels and proportions for optimal health. No salt has been added. All grits have been graded to be of an appropriate size for the pigeon. All blocks are baked so that they hold their shape but can easily be broken down with the pecking action of the birds. The result is a pick stone that is not only good for the birds but is something they enjoy eating. Its use has been shown to decrease disease problems and to produce tight brown droppings, robust quick-growing youngster and good-quality feathers. It should be made available to the birds at all times. Biocal Vitamin and Mineral Supplement For Caged &a 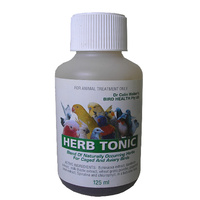 Herb Tonic For Birds 125ml A Blend Of Naturally Oc