Toxin Binder has been formulated from specific ingredients that may bind harmful mycotoxins in the horse's digestive tract during suspected mycotoxin poisoning.

What is a Mycotoxin?

Mycotoxins can be found in the moulds and fungi that grow on some grasses (mainly paspalum, rye, couch and some weeds and clover). More than 500 mycotoxins have been identified to date. They are more prevalent in hot and humid conditions (spring and summer) and can also be found in some commercial feeds and hays.

Starting with one teaspoon, gradually introduce into feed over a few days. Results are usually noticed within one week. During bad seasons use the highest dose rate rec-ommended.

For several horses suspected of having mycotoxin poisoning, it is reccommended to feed each horse Toxin Binder as the other horses symptoms may not be as apparent.

How does Toxin Binder work?

Mycosorb A contains two main ingredients; a specific strain of yeast and algae meal. My-cotoxins are throught to bind to this strain of yeast, thus removing them from the horse's digestive tract. The algae is also thought to target and absorb different types of toxins, removing a wider range of toxins when com-bined.

Actigen and Ecocell are strains of yeast containing Mannan Oligosaccharides (MOS). MOS are considered a prebiotic and are thought to promote the growth of healthy gut bacteria. They are thought to reduce the number of pathogenic bacteria in the hind-gut. They may also boost the immune func-tion in the digestive tract.

Powerstance is powdered coconut oil. It may have antimicrobial actions from the lau-ric acid for optimizing gut health, maintain-ing appetite and normal digestive function. 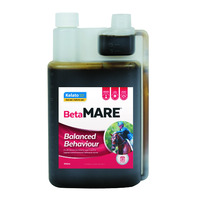