Vigilant II Gel is a ready to use gel developed especially to control a wide range of woody weeds and trees, scrambling weeds and vines and general broadleaf weeds.

VIGILANT II is effective against a vast range of common problem weeds, making it perfect to have on hand.

Formulated as a gel, VIGILANT II is ready to use straight out of the pack. There’s no need to deal with messy chemicals, plus it has the added advantage of limited user exposure thanks to the novel applicator bottle. Simply apply the gel to freshly cut stems or foliage and Vigilant II will take care of the rest! The 240g applicator bottle is re-usable and can be refilled from the convenient 5L container.

Vigilant II Gel is ideally suited for use in environmentally sensitive and difficult to access areas.  It is easily transported and is safe to the user when applied according to label directions.

Vigilant II Gel is applied directly to freshly cut/crushed stems or trunks of weed plants and is suitable for use in sensitive areas including native bush, conservation areas, farms, lifestyle blocks, gullies, parks and reserves.

Vigilant II Gel is effective on a large range of woody, rhizomatous and vine weeds and is ideal for use by professional weed controllers, government and local government employees, land-care and volunteer groups. Vigilant is a low toxicity herbicide gel which provides a simple non-spray alternative for selectively controlling invasive weeds without the risk of spray drift. Vigilant is applied directly to freshly cut/crushed stems or trunks of weed plants and is suitable for use in sensitive areas including native bush, conservation areas, farms, lifestyle blocks, gullies, parks and reserves.

Susceptible Species: (this is not a complete list, registration for woody weeds only):

Application should be made in fine weather at any time of the year.

WOODY WEEDS, TREES AND SHRUBS: e.g. barberry, broom, buddleia, climbing spindleberry, cotoneaster, Elaeagnus, elder, gorse, hawthorn, matagouri, pine, poplar, privet, sweet briar, tutu, wattle, willow, woolly nightshade, etc. Cut stems horizontally between 20 and 100mm above ground level. Apply a 3-5mm thick layer of VIGILANT II over all the cut surface. Alternatively, for larger shrubs and trees with a trunk diameter greater than 150mm, make a series of 15-20mm deep cuts around the main trunk using an axe or pruning saw. Cuts should be evenly spaced at 20-40mm intervals. Apply a 5mm layer of VIGILANT II over the lower surface inside the cut. In the case of multi-stem plants, treat 80 percent of stems including all main stems.

RHIZOMATOUS PLANTS: these include Kahili ginger & agapanthus. On agapanthus prune all shoots horizontally at the rhizome and apply a 3-5mm layer of VIGILANT II across all the cut surface. On Kahili ginger prune and treat as for agapanthus, plus, if there are more than four rhizomes between shoots, drill a 10mm hole into every fourth rhizome from a shoot, 80 percent the depth of the rhizome, and fill the hole with VIGILANT II.

WANDERING JEW: apply VIGILANT II at 16g per square metre over the foliage using a paint roller or similar. Make sure the foliage has been completely flattened during application.

BROADLEAF WEEDS IN PASTURE AND WASTE AREAS: including capeweed, docks and woolly mullien. Apply a small dollop, approximately 20mm in diameter to the centre of each plant.

Methods to apply Vigilant II include; 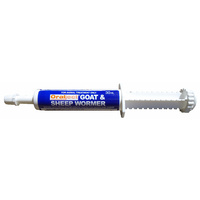 Amprolium 200 Soluble Powder. For The Prevention &