WSD LEVAMISOLE is a broad spectrum treatment for roundworm parasites of sheep and cattle.

WSD LEVAMISOLE is a solution for oral use as a drench containing 27.5g/L Levamisole- an imidazothiazole compound. It is commonly

known as a 'clear drench'.

Mature and immature stages of worm parasites susceptible to levamisole:

Dairy Cattle & Milking sheep: Do NOT use in cattle or sheep producing milk for human consumption

Always refer to the label. Separate into different weight classes if there is a large variation in age and weight.

Levamisole may be toxic. It is recommended that sheep or cattle should NOT be fasted before the administration of any drench containing

Sheep and lambs: Dose at the rate of 1ml per 4kg body weight.

Cattle: Dose at the rate of 10ml per 45kg body weight

·WSD LEVAMISOLE is a reliable broad-spectrum oral drench for cattle of all ages.

·It is often best administered to adult cattle with a drenching hook.

to be effective against other local worm parasites. It is advisable to test efficacy before relying on levamisole as a strategic

the later use of an effective strategic treatment from the WSD range of drenches.

·Levamisole is not effective against tapeworms.

·Resistance to levamisole is widespread among some species of gastrointestinal parasites on Australian sheep farms.

·The repeated use of any drench is likely to result in the emergence of resistance and therefore,

regular testing for efficacy is recommended.

Milking sheep or dairy cows/goats: Do not give during pregnancy or lactation to animals which are

producing or may produce milk for human consumption.

This information was correct at time of printing, however Withholding Periods and Export Slaughter

Interval (ESI) can change. If you are concerned, please check with WSD for the latest information.

Milk withholding: Not for use in dairy cattle or sheep producing milk for human consumption Ausmectin Pour On For Cattle. 1 Litre or 250ml 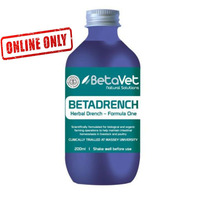